You are here: Home > Things to Do > Wharram Quarry Nature Reserve 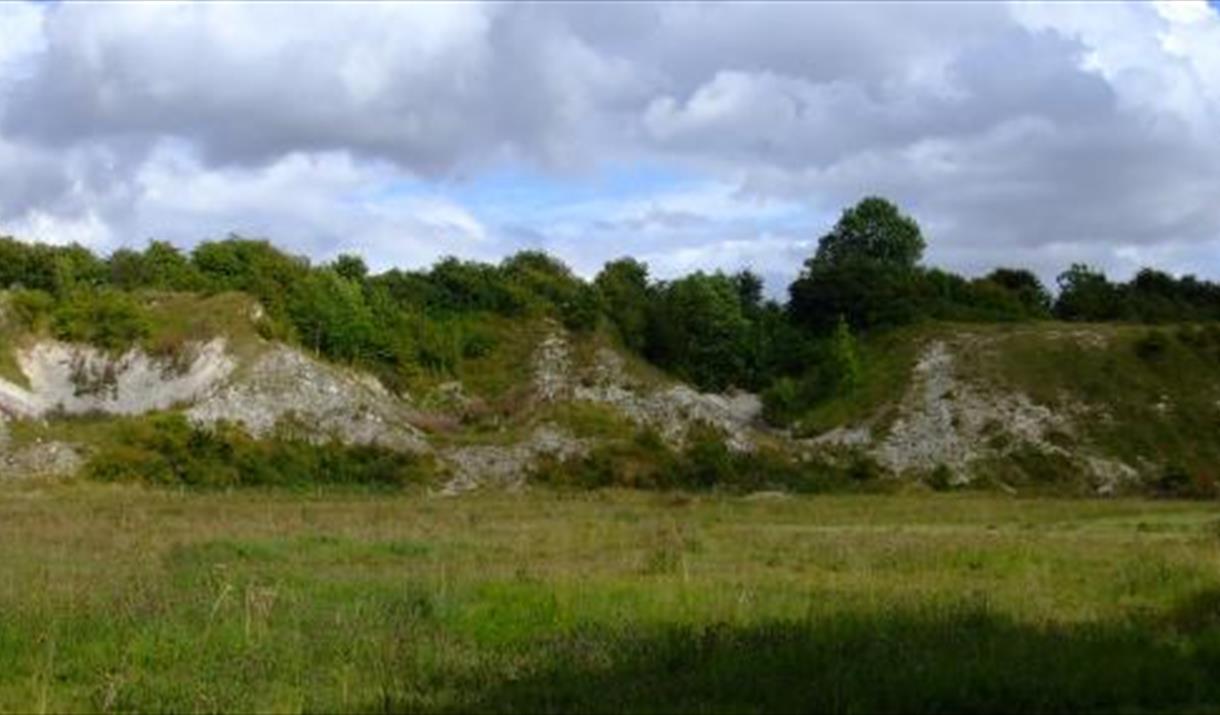 The reserve is a chalk quarry last worked in the 1940s. A flat floor and step cliff-face with hollows scooped out, it provides a variation in habitat conditions. The quarry is cut into the Middle Chalk (Turonian) of the Cretaceous Period (about 100 million years ago). Much of the floor of the quarry contains an interesting range of plants that can grow in dry, skeletal soils. A periodical scraping away areas of top soil conserves the presence of these interesting chalk colonisor species.

The quarry floor has variable depths of soil and consequently different plant communities. The west of the reserve, where spoil was deposited, is now dominated by coarse grasses and hawthorn scrub. Several species of grasses can be found including cock’s-foot, meadow and false oat-grasses, red and sheep’s fescues, and quaking grass. Glaucous sedge is widely distributed.

The wildflowers present a beautiful scene, they include the yellow flowers of cowslip rough hawkbit, mouse-ear hawkweed and bird’s-foot trefoil; the purple wild thyme and clustered bellflower; the pink restharrow and the blue common milkwort. Common spotted, pyramidal and bee orchids can all be found in June and July.

The quarry is one of the few Wolds sites for thistle broomrape which parasitizes woolly thistle. The endangered red hemp-nettle has been introduced from nearby populations along with small-flowered buttercup on the quarry face.

In order to maintain the succession of plants, areas of the floor have been periodically scraped back to the chalk. To prevent the succession from open flower-rich sward to dense coarse grasses and hawthorn scrub the quarry floor is grazed with the Trust’s Hebridean sheep in winter and parts are mown in late summer.

Between the many small areas of bare ground grow bird’s-foot trefoil, common rest-harrow and grasses such as quaking grass and crested dog’s-tail. Pyramidal and spotted-orchids occur and, in some years, there is an abundant display of bee orchids, whose flowers mimic bees to attract pollinators. Several species of butterfly abound, the ones most likely to be encountered being ringlet, common blue, meadow brown and small heath.

The face of the cliff is unstable, but is beginning to develop a vegetative cover in places. Winter-cress grows in this habitat. The hollows in the cliff have a developing flora of shrubs and trees including ash, apple and gooseberry. The gradual development of soil structure leads to the growth of tussocky grasses such as cock’s-foot and false oat-grass. This can only be prevented by grazing either by rabbits or livestock.

A track leads to the southern end of the reserve and a path, marked by stones, returns along the face of the quarry. Much of interest can be seen from the path; straying from it could be dangerous as buildings and kilns are unsafe.

The Wolds Way passes close to the reserve and Wharram Percy, the mediaeval village, is also close by. Wharram Quarry is owned by Birdsall Estate Company Limited and is leased as a nature reserve by an agreement dated 7 July 1966.

Size: 7 hectares.
Entry fee: Free.
Parking information: Limited roadside parking by the gateway available.
Grazing animals: Hebridean sheep in the winter.
Walking trails: Permissive footpaths. Keep to footpaths as straying from then can be dangerous as buildings and kilns are unsafe.

By Road:
The reserve is close to the village of Wharram-le-street which is on the B1248 Malton to Beverley road, seven miles east of Malton.

At the crossroads in Wharram-le-street follow signposts south-west towards Birdsall. The reserve is on the left after about half-a-mile with a YWT sign at the only entrance. There is limited parking here.

The nearest railway station is Malton, which is 7.4 miles away.